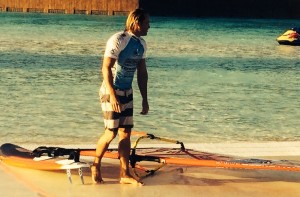 With building high waves and gusts of wind reaching 70 knots, only the best were nominated to participate in the “Red Bull Storm Chase”. During an 18 month holding period, ten of the world’s best windsurfers waited patientñy to catch three of biggest storms on oceans around the globe… After Mission 1 in Ireland (January 2013) and a second mission in Tasmania (August 2013), Red Bull Storm Chase picked the storm ravaged coast of Cornwall for the third and final location for a showdown between the remaining four.

2014 has been simply a great adventure, knowing it’s a cliché, we´ve met a lot of awesome people doing awesome things,  one of the most extreme was watching these windsurfers playing it up like hell. Come on, we want more!!

(Hoping Dani Bruch will be at the head of PWA (Professional Windsurfers Association) Tenerife 2015, last year was great!!)

Life Is What You Make It